It is upon us: Brothers in Arms is now available on a kindle device near you. 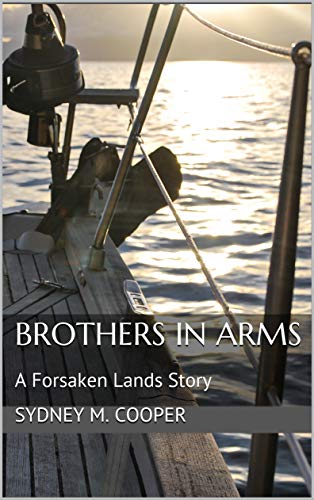 Dmiri’s journey from loyal Celet officer to leader of a rag-tag military coup has taken everything from him – his friends, career, and reputation. Working alongside unlikely allies from a foreign land, Dmiri is forced to face the harrowing truth about the people and institutions he once revered.

It’s amazing to be back in the game after being out for so long, and I’m so happy to finally be in a mental space where writing is realistic. Naturally it’s going to be a while before I publish anything again – the next project is Forsaken Lands III, and that is going to take a lot of work. In the spirit of celebration and out of a sense of tradition, the following is the playlist used while writing:

Killer in the Mirror by Set it Off

The Plagues covered by Caleb Hyles and Jonathan Young

The Other Side cover by Caleb Hyles and Jonathan Young

Brothers in Arms is above all a story of character evolution through conflict and grief. The identities of the characters is not a central focus, though it is absolutely my intention to be inclusive of LGBTQIA+ identities (generally my characters come to me as they are and it doesn’t take any effort on my part!). Representation in media matters. Seeing a mirror of one’s own experience in fiction is deeply validating and important for everyone – it has certainly been important for me. I would like to be unambiguous on this point: Dmiri and Garren are gay men, Eling-Mai is asexual/aromantic, and Dexyr Wu is non-binary.

Well, there it is. I hope someone, somewhere reads it – and if you do, I hope it means something to you. It has to me.